Just an update to remind you that even though the super-fun, nautical part of Exp. 353 is over and done with, that doesn’t mean the work has stopped. Oh no indeedy, it’s just the beginning!

This week a crack team of iMonsoon participants has assembled in College Station, Texas – the (somewhat unlikely) beating heart of US-IODP operations – in order to get our shipboard reports spruced up and ready for publication and digestion by the scientific community at large.

4/5 of the IODP Exp 353 editorial team on our last day of report editing. Go team!

You might remember me telling you that while we’re at sea we write the detailed site reports as we go, in between describing and analysing the cores and collecting the data. While this is certainly the most efficient way of getting the reports done, while the material is right in front of us and it’s all fresh in our minds, the high-pressure nature of the day-to-day work means that there’s not always time to get the reports 100% right while we’re at sea. No matter how much you love your science, in week 7.5 of an 8-week cruise, you’re a bit too tired to write coherent sentences and make beautiful figures. We’re only human.

So here we are, in a massively air-conditioned room in Texas filled with coffee and energy bars, sitting down together to fix up the reports. One to two members of each team (sedimentology, paleomagnetism, biostratigraphy etc.) has been invited, along with both our co-chiefs. So it’s not the whole jolly gang, but everyone on iMonsoon has had the opportunity to comment on the reports by email in the previous weeks and give feedback to their representatives. 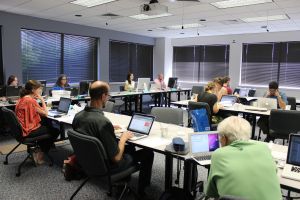 Well, I never promised that this blog post would be a visual treat…

It’s great to see everyone again and look over all the great work we did last winter – gosh I’m proud of what we achieved on this cruise! – and it’s nice to know the Proceedings will be published soon so everyone can have a look. (The shorter Preliminary Report is already out there, but the real meaty stuff is yet to be released). This is also a great opportunity for us to talk about the follow-up science projects we are planning with the Exp. 353 material and to shore-up our collaborations. Everyone is busy writing grant proposals to their respective funding agencies (so, NERC for me, NSF for the Americans, etc.), and we’re hoping the funds are forthcoming to support the great work we’ve got planned.

The extreme heatwave in India over the last month, and the terrible toll this has taken on people’s health and livelihoods, is a stark reminder that understanding how the monsoon will respond to ongoing climate change in the future is of major societal relevance. We hope that the new knowledge about the past behaviour of the Indian Monsoon this Expedition will bring, will contribute to this effort in the coming years.

The Exp. 353 team be meeting up again in Oct 2015 for the sampling meeting in Japan, this time to get our treasured mud samples(!), and I’ll tell you all about that later on in the year, but for now it’s over and out from me. Wish me luck with the track changes and my steady diet of Texas tacos.